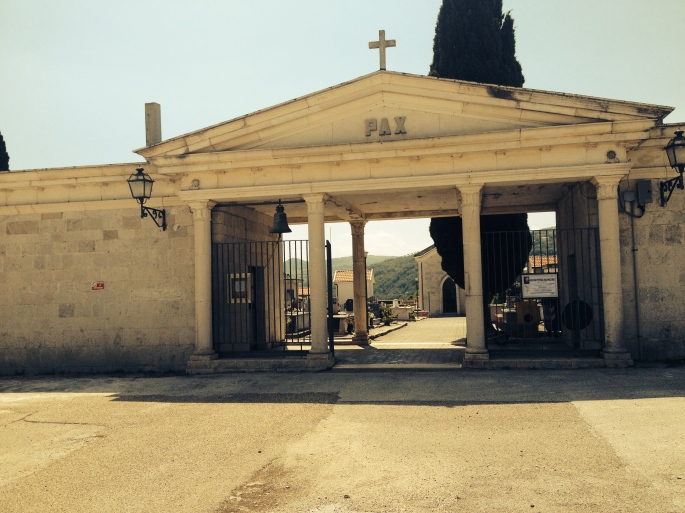 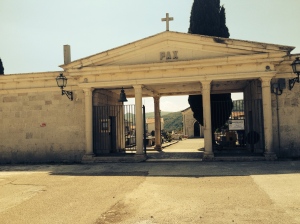 Finally – the story you may or may not have been waiting for – the funeral traditions of my Italian home town. A shout out on this topic to  Art Adair of Somerville’s New Cemetery, Jimmy Cusick of Cusick’s Funeral Home and Mayann Carroll, former ace lobbyist for the Funeral Director’s Association.  Sorry that this particular blog was usurped earlier by my finding my great grand daddy’s bones and turning into a pile of weepy. (https://nonnasmulberrytree.com/2014/06/06/finding-my-great-grandfather/)

This morning when I got up there was a line of cars outside our house. (Thats a lie, it’s been a week since this happened but I didn’t want to mess with the story.) I mentioned the cars to Jack and he said they had been there late last night too. An all night bash and we weren’t invited?  Of course we are usually asleep by 10:00.  Our house is really close to the cemetery but it has a parking lot and this car line started further up the hill. H’mmm.

Our neighbor and friend, Nicola Ciarlo, stopped over for caffè.  Nosey Jack asked why Nicola wasn’t working.  “There’s a funeral, he said, don’t you see the cars?”  What cars, I said?  (Hey I’m not the nosey one.)  Looking at me like I had Campari for breakfast, Nicola said, “The ones on the road by the house?”  Oh those cars.  Why are they here? “People are visiting the family.”  We do that in the New Jersey too.  “With the body?” he asked.  I retorted, The real body – the dead body?

According to Nicola, here in Pontelandolfo they bring the coffin to the house, arrange the body in the bedroom or another room and everyone comes to the house to pay their respects.  People bring food and many kiss the dead person goodbye.  (Try bringing food to a NJ funeral parlor – I’ve gotten my hand slapped trying that one – right Jimmy.)

The family stays up all night with the corpse.  My first response was YUCK will I ever use that room again.  Then, thinking about it, the idea resonated with me and actually sounds more civilized than schlepping the corpse from a drawer in the morgue to the paid company’s home. (Sorry Jimmy, your funeral parlor often feels like my home away from home.)   They don’t have funeral parlors in Ponteladolfo – they have funeral facilitators.  So unless you  want to cart the body to – well I don’t know to where – you have to use your own parlor.  H’mm that could be a lot of work.  I mean, how long is the body in the house — I’m thinking three visitation days – two hours in the afternoon and two or three in the evening – or something like that.  “Oh”, Nicola said, “its only 24 hours then the funeral at the church and burial.  People visit most of that time.”

I was blessed to be present when my dad died and moments after my precious Aunt Cat died.  During that period of time, I could feel the force of their spirits leaving.  It wasn’t ugly or scary – it was an opportunity to share yet another moment with someone you loved.  So maybe taking the process one step further and having your loved one pass on from their home isn’t’ so bad.  Years ago that was the American tradition too.

I only saw the sign for one “organizzazione funerali a Pontelandolfo” – notice it is not a “home or parlor.”  The company, Agenzia Funebre Diglio, located on Piano della Croce, 8 – 82027 – Pontelandolfo, BN, organizes funerals.  They do not embalm!  Bodies here are not embalmed.  I’m thinking the NJ Funeral Directors lobby would have a hissy fit if folks started screaming for our laws to change and bodies in their natural state were allowed to be viewed for 24 hours and interred.

My Italian is not the best so I may have misunderstood some of Nicola’s nuances but research and Jack’s memory of his Italian teacher saying the same thing confirms what follows – sort of.  Here you only lease a spot for a coffin.  If you have a lot of money you build a zinc box like thing and your coffin rests on a cement pad.  You then have thirty years to decompose peacefully.  If you have less money your coffin is partially buried in the dirt and you have a small shell of an exterior box. You get ten years of a cozy spot.

After thirty years – or ten – the body is exhumed, bones are cleaned and put in a small box.  Often, there is another ceremony for the bones.  The bones are then placed in a smaller spot on one of the long walls of marble.  Poor folks who don’t have family drawers on the wall are placed in the basement of the cemetery chapel. Those of you who read my last post, heard that story.

People of means have little private burial houses – what do we call those – memorials?   (If you know what these things are called leave a comment.)   The family’s remains can stay in the coffin in a place permanently or be removed later to make space for younger relatives, their bones placed in a glass box and put to rest in a smaller spot.

The people here visit their deceased family often. I see families come bringing new flowers weekly.  There is a real connection to the past.

This exhumation and re-burial in a smaller spot is far from barbaric. It is done with love and a understanding of the cycle of life. The mountain’s rocky soil makes interment difficult. Usable land is farmed to bring food and income to the residents. The re-interment of remains has been going on for hundreds of years – think of all the bones found in ancient church lower basements- catacombs. More important than the burial process is the honor that is given to the dead – ongoing by even the younger generations.

After Nicola patiently explained all that to me, I decided to walk down the hill and see the funeral precession for our neighbor.  I chose to watch from the great patio at Bar Mixed Fantasy. Whew, I got here just in time to watch the lead flower car slowly move up the hill to the old church. The hearse followed and following the hearse,  just like in every old movie of an Italian funeral, people from the village slowly marched up the hill too.  Wait a second – the person dies, is laid out at home and within hours folks are visiting, bringing food and clearing their calendars for the next day’s funeral.  How does the news spread that fast?  One of the services provided by the Funeral Agency is the immediate printing and posting of the large death notices.

The first time I came to Pontelandolfo – years ago – I saw plastered on the wall a death notice for Giovanni Guerrera.  It was a little freaky since I had spoken to my dad the day before and he was fine.  The death notices are either simple or adorned with art.  Within hours of the persons passing the notices are posted on the villages walls and posted at the cemetery.

Ok, back to my glass of succo d’arancia rossa and the procession.  I will admit I wanted to take pictures but I thought that it would be incredibly tacky.  It was a very quiet and somber movement towards the church.  OK,OK, I snuck one picture of the flower car. (This is for Cusick’s Funeral Home.) 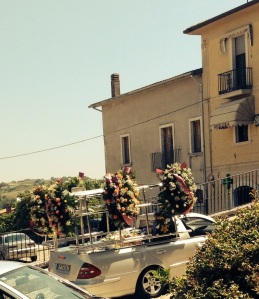 After the mass, the procession moved slowly down the hill to the piazza and on towards the cemetery. Where the loved one will be interred undisturbed until the lease runs out and they are moved to their final resting place surrounded by those that loved them.