Bravo!  This February 12th, Forum Giovani di Pontelandolfo produced E Fuori Nevica!  The young actors had only planned on one performance – wrong!  The show was so well recieved that an encore performance is being presented stasera, tonight, Friday, February 24, 2017. 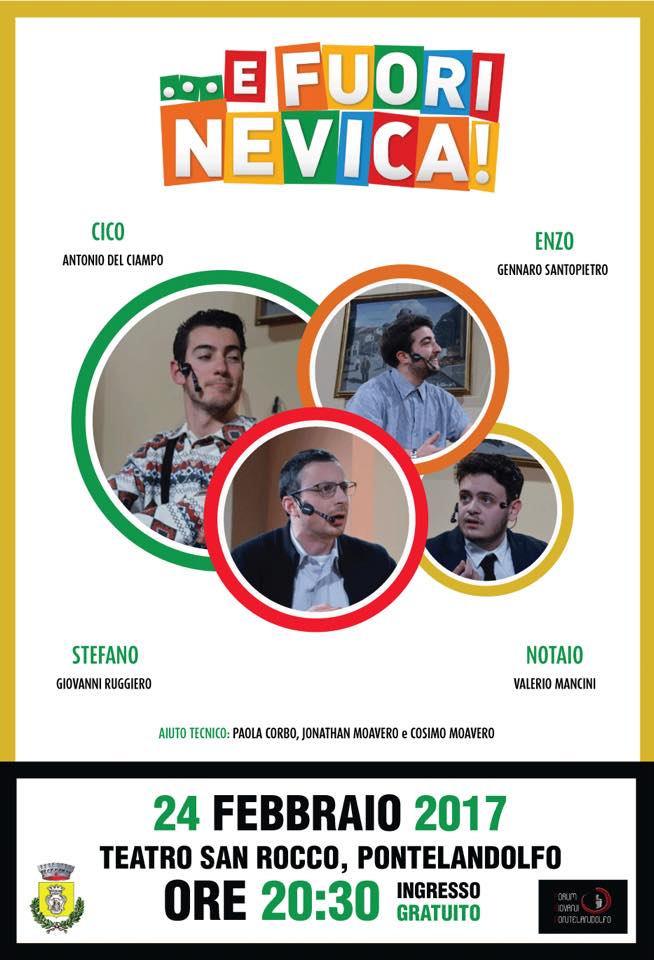 2’nd Chance to See the Play!

Enthusiasm for the actors, the play and the project has moved beyond the boundaries of Pontelandolfo.  The play will also be touring to Casalduni and Fragnetto!    Whew – my enthusiasm is leaping ahead.  You’re probably wondering who, what, where…

WHO:  Forum Giovani di Pontelandolfo is the association of young adults that actively endeavors to bring culture, entertainment and a grand good time to the village.  Many of them were involved in the July, 2016 collaborative theatrical production of Sacro di Santa Giocondina. The production was so well received and such a positive experience for the young thespians that they wanted to continue to bring quality theater to the community. 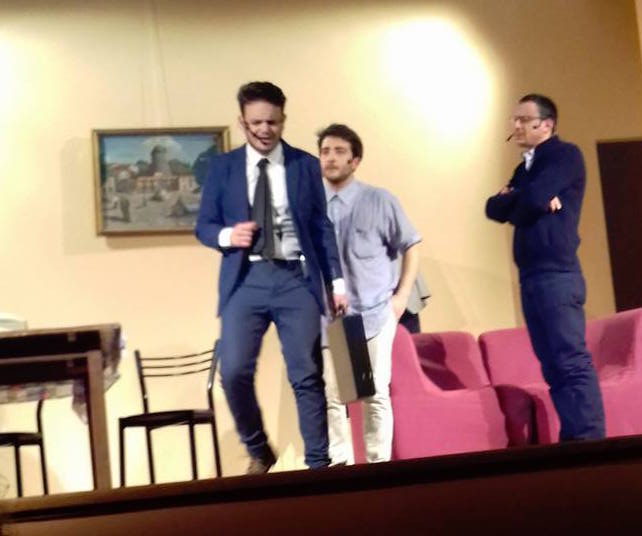 The comedy deals with the familiar theme of family relationships and dealing with a handicapped sibling.  The characters include: the burgeoning musician, Enzo, played by Gennaro Santopietro; Cico, suffering from autism, played by Antonio Del Ciampo (President of the Forum); Giovanni Ruggiero plays Stefano, the brother with an excessive sense of responsibility; and Valerio Mancini (my handsome cousin in blue blazer) plays the notary.  Paola Corbo and Jonathan Moavero provided technical support.

WHAT:  E Fuori Nevica! by Vincenzo Salemme is the tale of three brothers thrust together by their mother’s death.  In order for the three men to inherit from mom, they had to live together .  That means three incredibly different personalities – including an autistic adult, obsessive, and bopper – find themselves in the same house.  The story is hilarious, touching and heartfelt. Author, Salemme, born in Bacoli, Province of Naples, is a familiar comedic actor and writer.  He worked with the prestigious company of Eduardo De Filippo and has written and starred in numerous films.  You might recognize him from the RAI series Da Nord a Sud… e ho detto tutto!

WHERE:   The City Council granted Forum Giovani free use of sala-teatro Papa Giovanni Paolo.  The multi purpose room is behind Chiesa San Rocco on Via San Rocco.

I am in New Jersey and this is happening tonight in Pontelandolfo!  ERRRRRRRRG.