Growing up in Flagtown, New Jersey, we often visited Raritan,the town next door. When the dinosaurs roamed the earth, and I was a child, we hopped in the car and visited Raritan for pizza and gelato. Raritan was the closest we could come to hearing and seeing Italians. Home to lots of Italian American families, it also was a real town and for country girls a treat. The town took great pride in it’s son, World War II hero, Marine Gunnery Sargent John Basilone. Every September there was and still is a parade and festivities to celebrate Basilone’s heroics in the Pacific Theatre and his Congressional Medal of Honor.

Imagine my surprise to discover that a scant 20 minutes up and down the hill from Pontelandolfo was Colle Sannita, the Basilone family’s Italian home town. Anthony Bengivenga, contacted me to let me know that Colle Sannita was officially being declared the Sister City of Raritan. Anthony would be there to represent Mayor Chuck McMullin of Raritan and as a national officer, District Governor, UNICO National. (UNICO is the largest Italian American organization in the USA and was started in Waterbury, Connecticut – home of more Pontelandolfesi than Pontelandolfo.) Anthony oversees ten UNICO chapters and has also helped form the sister city agreement between Terno D’Isola in Bergamo and South Plainfield. Basilone’s mother Teodora Bengivenga was the cousin of Anthony’s grandfather. The connections sent shivers up my spine. There was no way I would miss that celebration.

John Basilone’s father was born in Colle Sannita. The municipal meeting room was packed with Basilones from around the world, including Kim Van Note, Diane Hawkins and interpreter Regina Basilone. Six dashing young marines from the US Embassey of Rome, who had played earlier both the Italian and American national anthems, were also there. 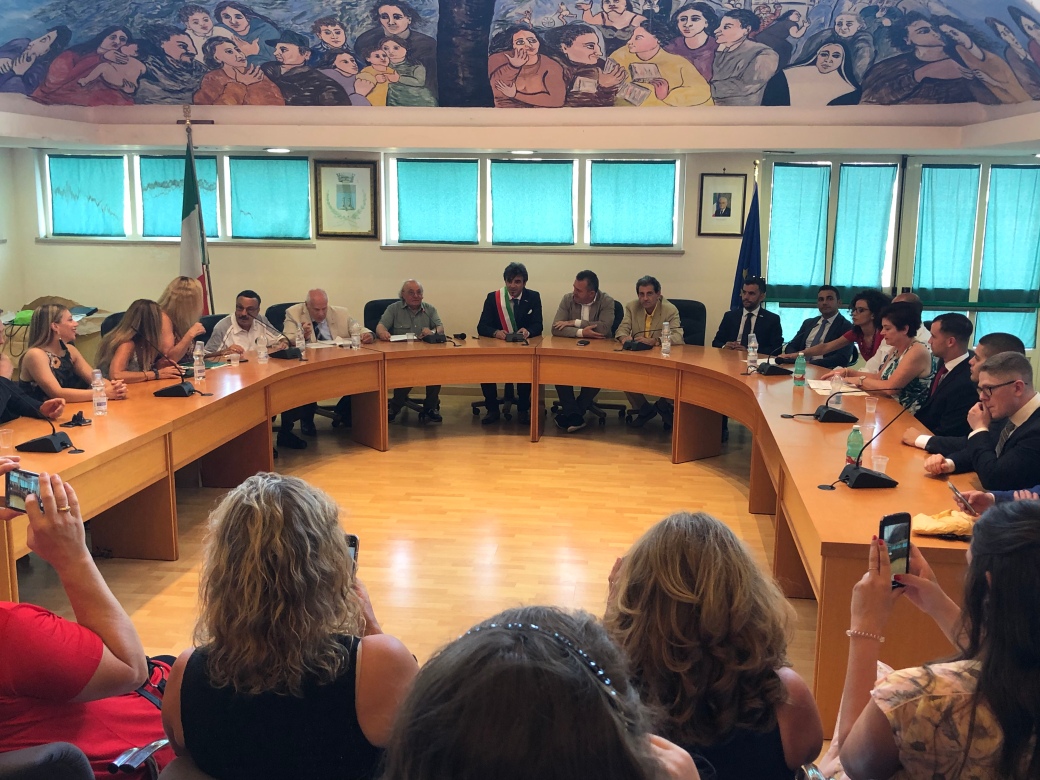 The sense of pride was so strong that my heart expanded and I could feel the tears welling up in my eyes. Not only was it an emotional signing ceremony, but I realized it was also a tourism and growth commitment between the two towns. Listening to the resolution, I heard terms like arrange for trips, exporting and importing products and mutual promotion. Smart move for both towns.

Anthony, an incredible representative of Raritan, UNICO and the family, gave a heartfelt speech. He also presented the Mayor of Colle Sannita with resolutions of endorsement from the New Jersey State Legislature and Somerset County, NJ. UNICO National President Frank DeFrank sent a letter of congratulations. WOW, it felt great being an Italo-Americano surrounded by such Italo – Americano passion and pride.

Thank you Anthony for making me realize that you can take the girl out of Flagtown but Flagtown is always nearby.