What? I queried.  You went where to buy wheat?

Jack and I love to travel on Italian trains. Age brings its perks – deep discounts on business or first class tickets.   I like the “four-top” set up. Four comfortable seats surround a table. There are places to plug in your “God Forbid I forget my iPad,” and interesting folks to chat with.  For example, the two businessmen who sat across from Jack and I. After ten seconds, they realized immediately that we were Americans and proudly proclaimed that they had just come back from Texas.

Charming gabby girl said, Texas – that is a great place to visit.

We were on business.

Jack was immersed in his book when I said, What do you do?

We buy grain.  We import Texas wheat to Italy.

My mind said “what the duck” but my mouth politely spit out, Why?

For the pasta industry.

Hands started flying and words were soaring over the four-top.  Now I was not, as Jack said, being SNARKY when I bellowed – Texas!  They make Italian pasta with wheat from Texas!  I wouldn’t eat anything grown in pesticide ridden Texas.  That is when Jack kicked me under the table.  OUCH!  (Don’t you kick me too – Texas does restrict some use of pesticides – I looked it up.)

The men, being politicians at heart, explained that Italy doesn’t grow enough wheat to make all the international pasta lovers happy.  Italian companies need to import wheat to satisfy the market need.  They have been buying wheat from the USA and Canada for years. 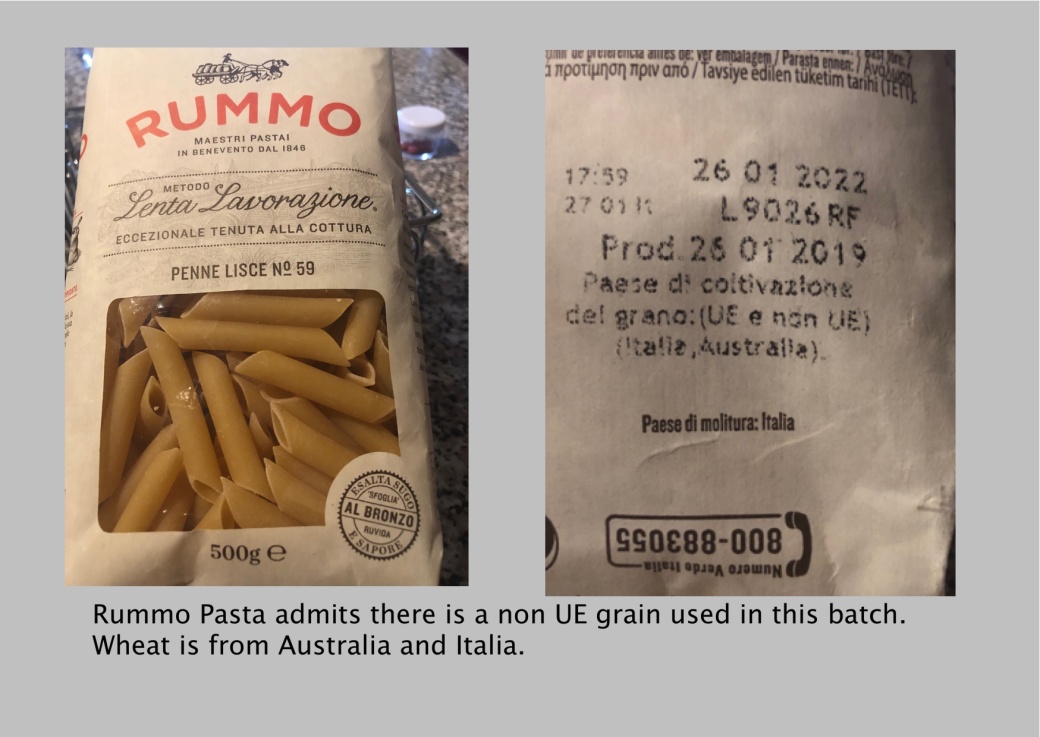 According to an October 2019 article in Worlds Top Exports,  in 2018, Italy ranked 4th in wheat importing.  They imported $1.82 billion of the heavenly grain.  The USA sold them 28.1% less than the previous year but still raked in $146.2 million.  Canada sold 81.1% less than the year before.  Why you might ask?  The answer is simple – pesticides.  I discovered an article on i-politics that talked about Barilla Pasta Company speaking to Canadian growers and explaining Italians don’t want to eat what they perceive as poison.  Italians lobbied and marched for locally sourced grains.

Italy, like other countries, legislated Country of Origin Labeling  (COOL) for food. That means you have to say where the wheat was grown and were it was processed.  That gives consumers an option.  They can decide where they want their dinner’s ingredients to hail from. I believe in eating local and shopping local.  What happens to wheat when it is shipped in big containers across the seas? Errrrggg – I can’t imagine the creepy critters that have stowed away.

In 1846 Antonio Rummo started making Rummo Pasta in Benevento.  The wheat he used was only from the Italian regions of Puglia and Campania.  I was sad to see that they too had to import wheat to satisfy their global customers.   Rummo is a local company so I do support them – but I also always read the label.

La Molisano Pasta is from Campobasso, also close to Pontelandolfo. Some of their products proudly proclaim on the front of the bag “Solo Grano Italiano.” 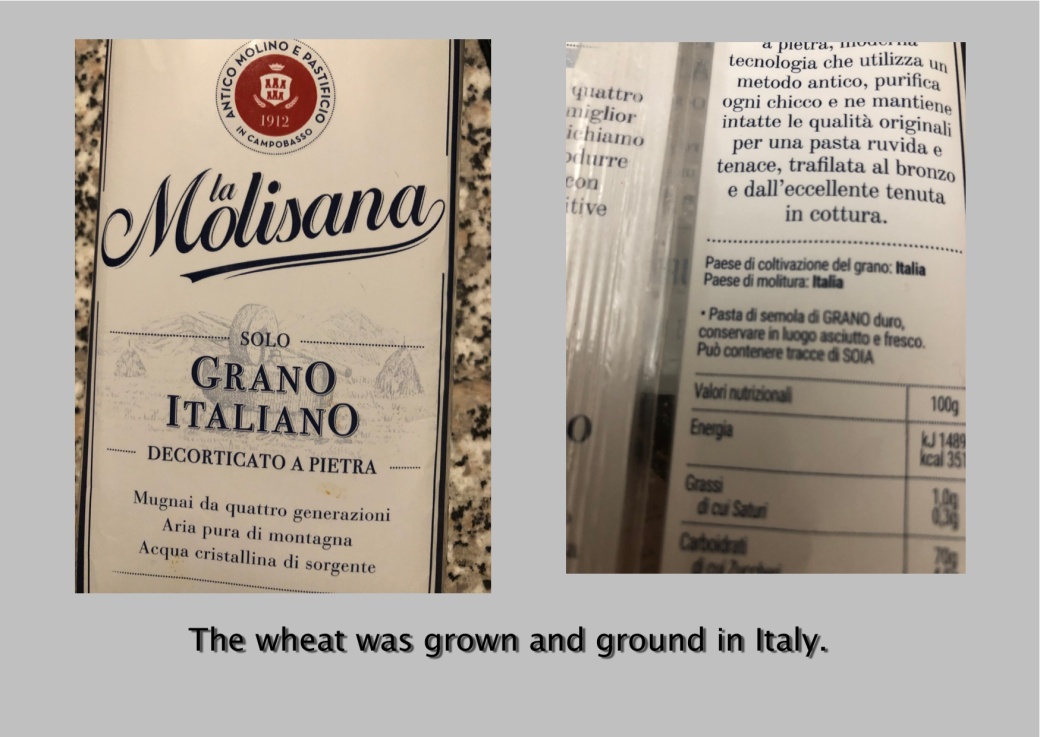 Other packages I have to turn over and put on my glasses to discover where the wheat was from.  Happily, I have only found La Molisana in our local supermarket made with Italian grain.

The USA does have COOL legislation.  Those “made in China” labels are everywhere.  Are we equally concerned about food?  We have all seen the labels in supermarkets that told us where the produce was fun.  Are those signs still there?  Let me know. In February, 2016 the United States Department of Agriculture repealed the COOL requirements for Beef and Pork.   I stopped reading their website after I saw that…

Those of you are shopping in any country but Italy, please let me know if COOL is in effect on pasta, rice and dry goods.  Are the labels there? I am really curious.

It is amazing what you can learn traveling by train.