On August 13, 1861, Pontelandolfo, home to 18 year old Concetta Biondi, was a quiet little mountain village.  Contadini were farming the land, children were seeking shady places to play and women were doing the million chores that women did daily.  Concetta may have been doing laundry in the common fountain trough.

THIS IS AN ARTIST’S RENDERING OF WHAT HAPPENED THE NEXT DAY!

Concetta Biondi was collateral damage in a battle – massacre – during the unification of Italy.  “Collateral damage,” that sounds so much better than raped and … I’m getting ahead of myself. Pontelandolfo is famous, along with neighboring Casalduni, for being destroyed by the Italian army.

Entering Pontelandolfo smack in the middle of the night, Negri’s oafs butchered and burned the village . Oops, husband Jack just read over my shoulder and said, “oafs is not fair.  They were soldiers obeying orders.”

Ok, OK, I’ll fix it.  Soldiers obeying orders butchered and burned the village. Within moments, the countryside was in turmoil. Families leaped out of bed to the ringing of the church bells, rapid discharge of rifles and the crunch of boots pounding on the cobblestones. Clutching their drowsy children, adults wondered what the hell was going on. Racing to windows, balconies and doors, the Pontelandolfese were shocked to see soldiers running through their streets. The Italian Army had arrived and they didn’t look like happy campers.

The soldiers, kicked in doors, leaped up stairs, raced into homes killing men, women and children. Those that tried to fight back were dragged under the tilia tree in Piazza Roma and shot. Flames soared as the village burned.   I’m guessing my ancestors were lucky to live in an outlying Contrada or I wouldn’t be here.

“The conduct was horrible and immoral.  The looting and arson is infamous.” (Historian G.De Sivo, The Story of the Two Sicilies, Vol.II).

Concetta Biondi’s story has come to represent the disdain the mercenaries and the Italian army had for women.  Hmm, hot night, testosterone high men, sleeping women dragged out of bed wearing who knows what…  The bastards, as history has told us happened countless times, passed the women around like bowls of candy waiting to be munched.  Children were tossed aside like garbage and trampled.  In the name of Italy, dads and husbands were held by the barbarians and forced to watch the madness.

As the marauders plundered the city, Concetta Biondi, hid in her basement behind some barrels of wine . When she was discovered by the mercenaries, she fainted. I can imagine them tossing her around like a sack of potatoes, copping feels and stripping her.  Her father, Nicholas Biondi charged down the steps to save her. Tied to a chair, he was forced to witness the depravity.  When they were sated, the pigs killed Concetta and tossed her aside.  Wine poured out of the tapped barrels mingling with Concetta’s blood. Nicholas Biondi was executed by a firing squad.

This giant sculpture near Piazza Roma reminds us never to forget 14 Agosto 1861.  We even have a walking trail for tourists who want to learn more about the atrocities and walk where the dead walked.  Gruesome, but interesting. Lots of books have been written about the incident, including a graphic novel! 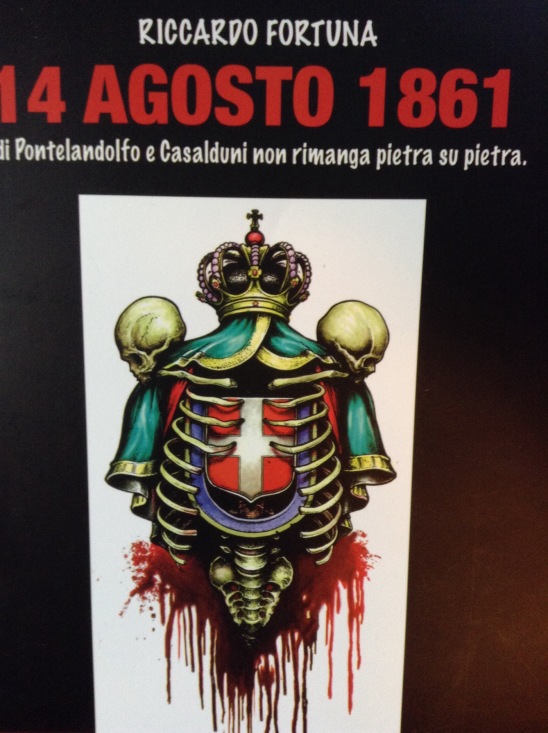 Professor Renato Rinaldi of the Pontelandolfo News is one of our resident experts. He has documented much of what happened.

Can we get back to Concetta Biondi please?  Certainly.  Saturday, for the first time I realized she was an actual human being.  Not just a fable representing war crimes.  But a real young woman who hadn’t done a thing to deserve dying like she did.  Il Club del Libro di Pontelandolfo hosted Italian genealogist Domenico Carriero for the day.  Many of us tagged along.  We went to the parish archives and watched as Domenico started researching Concetta Biondi.  The books – held in a area that is anything but climate controlled – though it was hot and a window was open – go back to the 1600s!  Our guide to the archive was Antimo Albini. ( This is the link to a story about him researching my family.). When this book was opened –

I began to feel the spirit of Concetta Biondi.  Her existence was noted in the parish records.  She once had walked the same cobblestone streets that I have explored.  She might have known my great grandfather or great grandmother.  Seeing the registry brought tears to my eyes and frankly, created an “ah ha” moment.

As mankind continues allowing violence to occur in villages around the globe, I’m glad Concetta Biondi reminded me that atrocities leveled in the name of nationalism are often heinous deeds perpetrated on innocents.

Cooking in the Kitchens of Pontelandolfo