Ri Ualanegli knows how to produce a Folk Dance Festival!  If you can’t get to Pontelandolfo – and I encourage you to get here – you can see the festival streamed live on Pontelandolfonews.com and on FaceBook Ri Ualanegli Pontelandolfo.  Save those links!  Save the dates – July 31, August 1 & 2. At the end of the blog there is a complete schedule of events – don’t forget the time difference if you want to catch the live stream.  The commercial will wet your appetite for folk dance and if that doesn’t work, read on about the two other Italian companies that will be in the festival – Urbanitas and La Pacchianella.

Based in the town of Apiro, Urbanitas, formed in 1933, shares the rural traditions and culture of the 19th-century Marches.  This was a period of abject poverty.  There were rare occasions for festivals.  Because they were rare, the festivals were incredibly unique and intense.  The peasants of the Marches, accompanied by sprightly music enjoyed themselves dancing that bordered on the phrenetic.

The company was included in the filming of Dino Risi’s Straziami ma di Baci Saziami, starring Nino Manfredi.  They have also been seen on both regional and national television.

Since the 1970s, Urbanitas has collaborated with the town of Apiro and produced an annual international folkloric festival, Terranostra Apiro.

This folk group claims to be one of the oldest – founded in 1923 – and most famous Italian group.  They come from  Monte Sant’Angelo in Foggia – noted for the white line of terraced houses and in the Christian world for its ancient rocky shrine where in 490 The Archangel Michael appeared.  I thought it was interesting that their costumes hint of Spain and reflect the Spanish rule of the area.  Lots of color, tons of gold – bling personified – is fun to watch and adds panache to the dances.  They have toured the world and made a number of films including one by Disney on folk lore.  This video has them dancing in front of the Statue of Liberty and the Eiffel Tower! 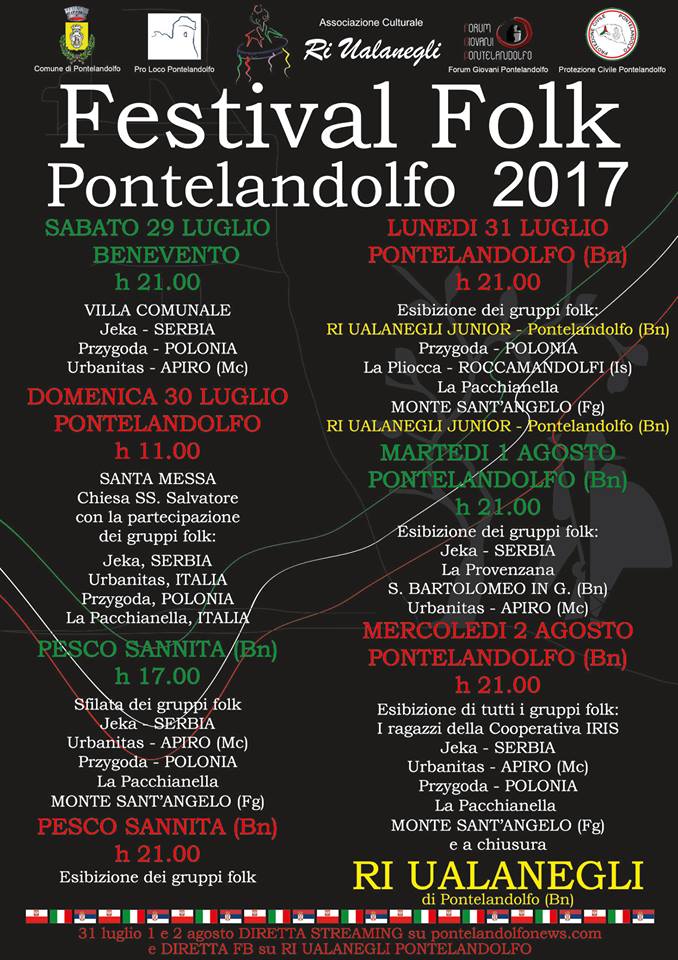 One thought on “Folk Festival to Stream Live!”