Thousands of tales have been told, books written, pictures painted and yet there is always something new to explore in Venezia –  that grand dame of a city. Me?  What did I explore?  Well, I didn’t go to the tourist packed spots like a normal person.  No, with my iPhone in my face I went back and forth across the Rialto Bridge and the same canal about thirty times – searching for Carlo Goldoni.  Not some distant relative – not some gorgeous hunk of Italian charm – but a dead white male playwright.  This Venetian was writing plays in the mid to late 1700s, so I know I couldn’t really find him.  I just wanted to sense him.  Before I talk about the search, let me remind you a little bit about visiting Venice.

We took the train to the main station, Santa Lucia.  Walking out the front door we were immediately impressed by the great view of the Grand Canal –

– and then turned into blathering idiots as we watched the swirl of tourists bumping into each other. Our first challenge was figuring out mass transit.  Realizing that since one way tickets on the vaporetti cost €7.50 and we would undoubtably go more than one way a day we bought the €20 a day package for three days.  At the ticket booth, when I asked for a map of the lines I was told I had to buy a map of Venice.  Ten minutes in Venice and we spent €123.  The map by the way is useless. Do not bother buying it.  It is impossible for the eyes of anyone but a 5 year old to read.  We got a better map of the Vaporetti at our hotel. Venezia Transit is the transportation web-site and one can read it in English.

Venice is an expensive trip.  A cappuccino averages €5 – compare that to .90 in Pontelandolfo!

Who cares!  I want to hang out where Carlo hung out.  Of course since he died in 1793 I may not find the same bar he sipped an apertivo in but I can pretend.  Oh, you’re asking – who the hell is Carlo Goldoni?  YOU DON’T KNOW???

Allegedly, regular comedy in Italy was apparently about to “flat line” when  Carlo Goldoni (1707-1793) leaped in with a defibrillator. My man Goldoni laid siege to the conventions of stock characters, improvised performances and the use of masks. Tsk Tsk. This did create a problem early in his career. Masked parts could be played by lousy actors. He had a problem finding actors who could act. At this point in theatre history the Italian playwright had to think more of working with his stable of actors than his public.

This Venetian began his career by writing opera librettos. Gaining in experience and in technical skill, he cautiously attempted to replace the base and (oh my) pornographic Comedia dell’arte with plays of innocent action that told the stories of contemporary events and characters. One hundred and sixty comedies remain – I haven’t read that many.  But I have read a lot – and surprisingly grasped the Italian. Some are written in the Venetian dialect – no way could I read those. He is said to have written as many as sixteen plays in one year.  See why I love him?  He’s an inspiration – I can only write one a year and then I can’t sell the bloody thing. His theatrical invention was remarkably fertile. Imagine – he believed that comedy could be drawn from an understanding of human emotions. He was not only profound, but according to those who knew him – I read all this stuff because except in dreams I never met him but loved the plays – he was charming, witty, true to nature, with buoyant spirits and an inexhaustible humor. Some folks – not just any folks but Voltaire – thought that Goldoni was the Italian Moliere!  He released “Italian theatre from the bondage of the artificial and pantomime performances – Commedia dell Arte – and laid the foundations of the drama as it is understood in our days.  Who doesn’t love him?!

Back to my quest – I got excited by the pictures I found on line. 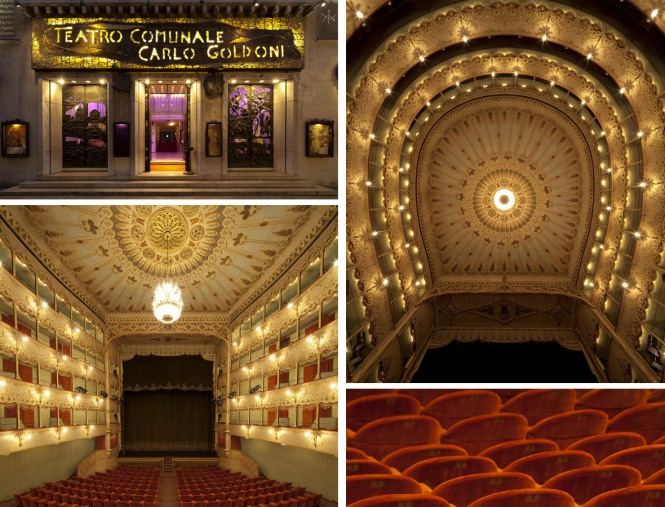 Il Teatro Goldoni is located in one of the older sections of Venezia.  Not only did the web-site excite me but there were posters around town about a performance of Goldoni’s work!!!!  I wanted tickets!  I wanted to tour the theater!  I love this playwright and have enjoyed reading his work.  I want to walk where he walked!  I put the address in the map app on my phone.  We took the vaporetti to the closest stop.  We walked and walked and asked and asked but couldn’t find it.  We crossed the same canal a pazillion times looking for it. I am quite sure with all that walking that I must have stepped on one cobblestone that Goldoni stepped on.  Not wanting to give up, I went into a small restaurant on a back alley and asked one more time – the waitress said the theater was just around the corner.  We asked her to save us a table out in the alley and we sprinted around the corner – wait – what corner – we tried corner after corner. 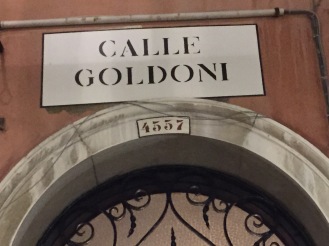 I found this little street -maybe he used to hang out on the corner with his buddies.

Look – Hotel A La Commedia!  We must be close to becoming one with the spirit of Golden.  BASTA!!! ENOUGH! Downtrodden we just went back and had not only a fabulous meal but lived a Goldoni scene.

An old woman looked down on us from a balcony and began to talk to us.  My Italian can get us food and a hotel but normally isn’t enough to hold a conversation of intricate detail.  Channeling Goldoni, the dialogue poured out of my mouth. The old woman guffawed as I regaled her with the tales of my quest.  She told me I needed to go to his house – Goldoni’s house?  Yes, it is now a museum!

4 thoughts on “Venezia – Searching for Goldoni”