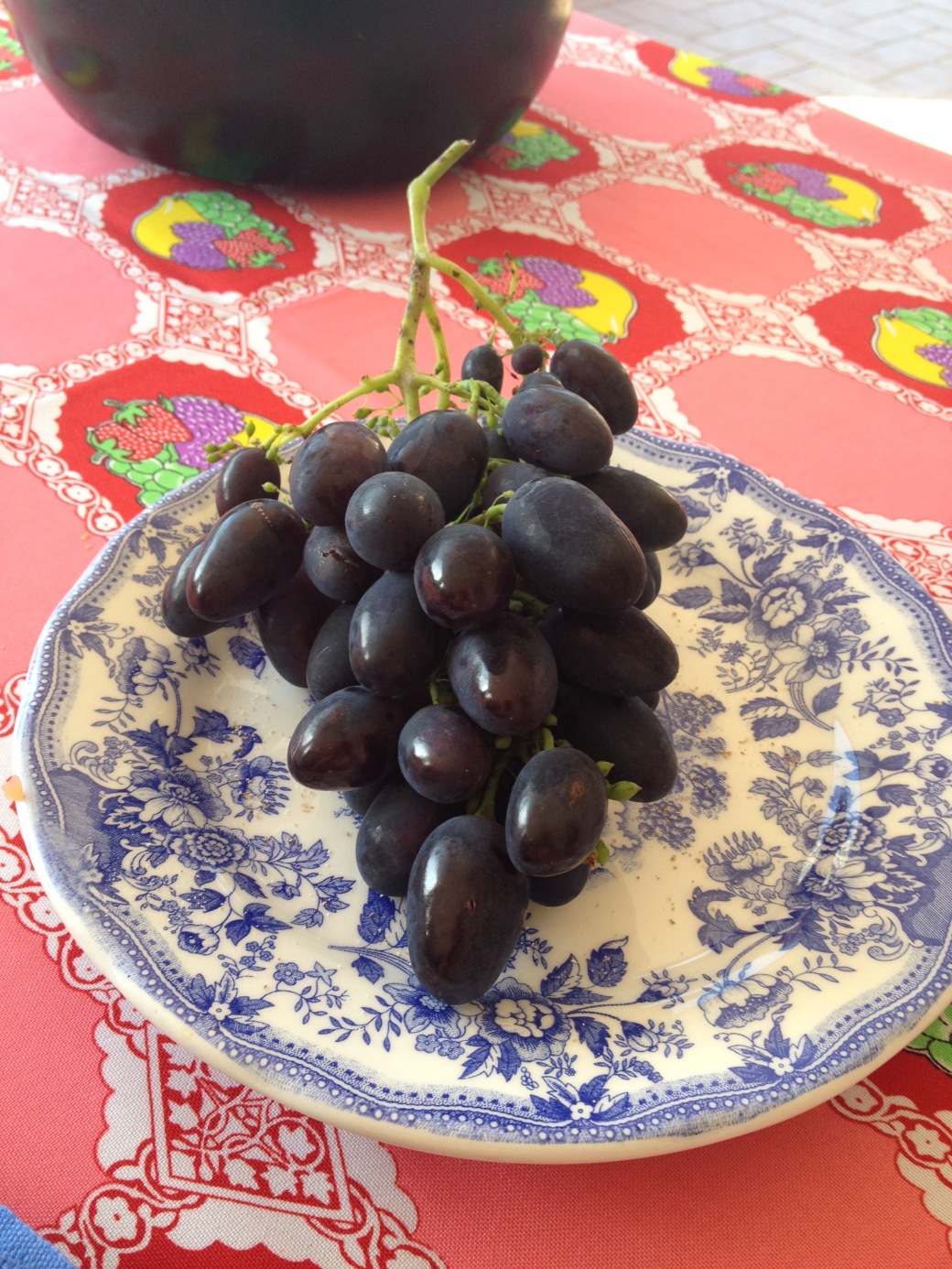 They were super yummy and I thanked her profusely.  The next day a crate of them appeared.  I know, I know be careful what you wish for. Even though we had a house guest, I knew there was no way we could eat all those grapes. What’s a woman to do?  Where the world hands you …

First stop, the internet – grape juice recipes.  Nah, we don’t add sugar to anything. Next. Nah, I’m not going to upstate NY for Concord grapes. Next.  How about asking around town? First folks looked at me like I was crazy – they’re fresh, eat the grapes.  Then a wise woman said, smash, boil, strain.  Damn, I can do that and I did – delicious and tons better than Welch’s.

Here is the recipe – since the only ingredient is grapes it’s more like steps.

1. Pick grapes that no one has sprayed cocky poopy chemicals on or genetically modified.  You are wrong you naysayer you, produce like that is still out there.  Here in the no spray land of good eating we have lots of grapes “au naturel.” They can also be found in the backyards of any of your relatives who sit in the shade of the vines growing over the trellis.  Take scissors with you and pick bunches.

2. Fill the sink with water and toss them in and swirl them around. 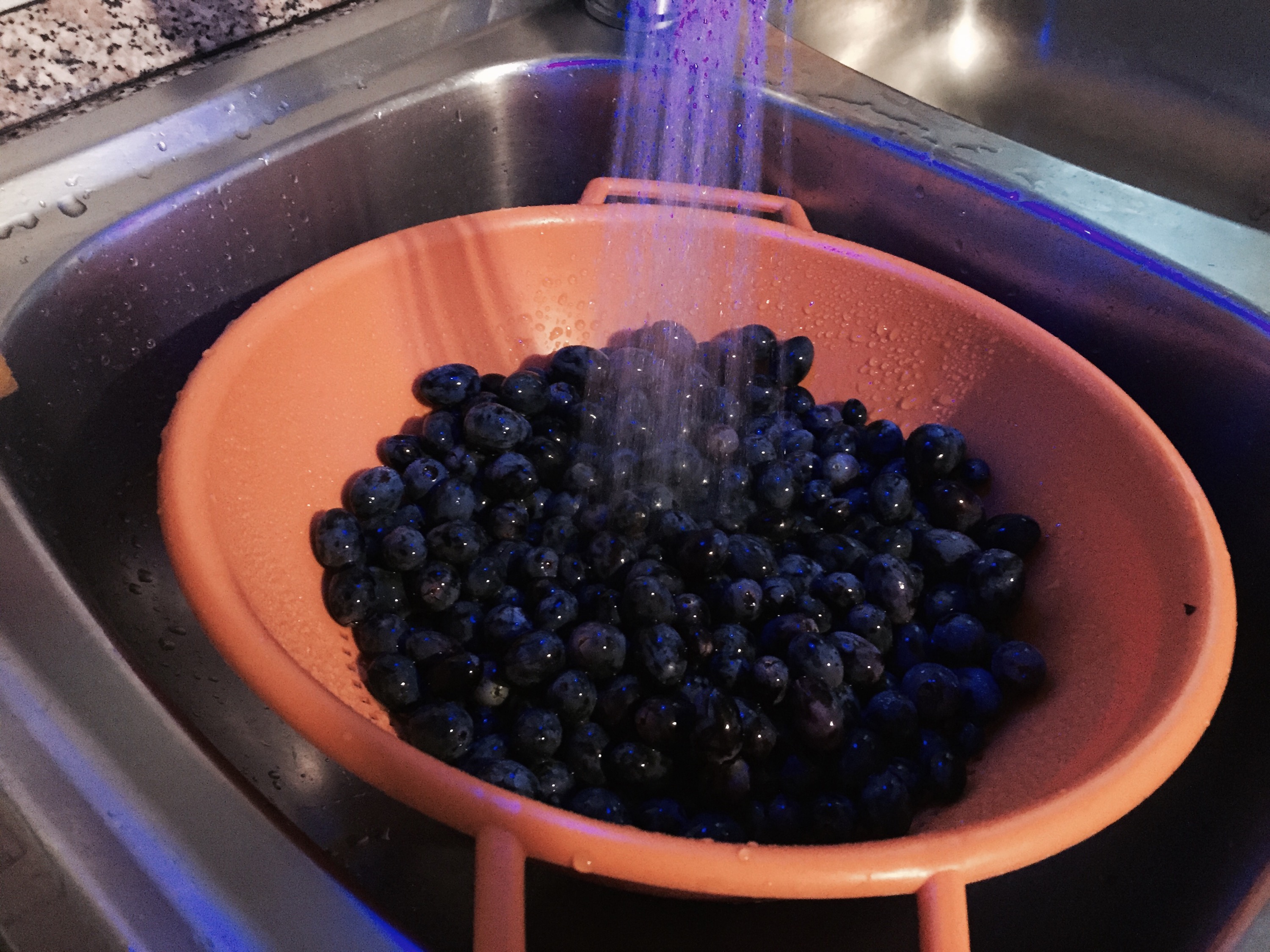 3 Put them in a scuolapasta and drain them. Notice the little worms and buggy things running around.  They seem to come to life in the water. Ditch them and remember no spray means happy bugs.

4. Hold each bunch by the stem and pick off the grapes.  I then tossed them in a second colander. We don’t want the ones the birds pecked or the shriveled ones. Just toss in the firm ones. I even tossed on the tiny ones.

5. Rinse off the grapes and dump them in a big pot. Take your potato masher and mash the hell out of them.  I didn’t have a potato masher and had a Lucille Ball fun time.  Not my feet – my hands!  I pummeled and squished and pounded and squashed.  Juice squirted me the pot and the counter.  I finally broke down and bought a potato masher and tried to use it for the second batch of juice.  It was easier to use my hands and much more pleasurable. 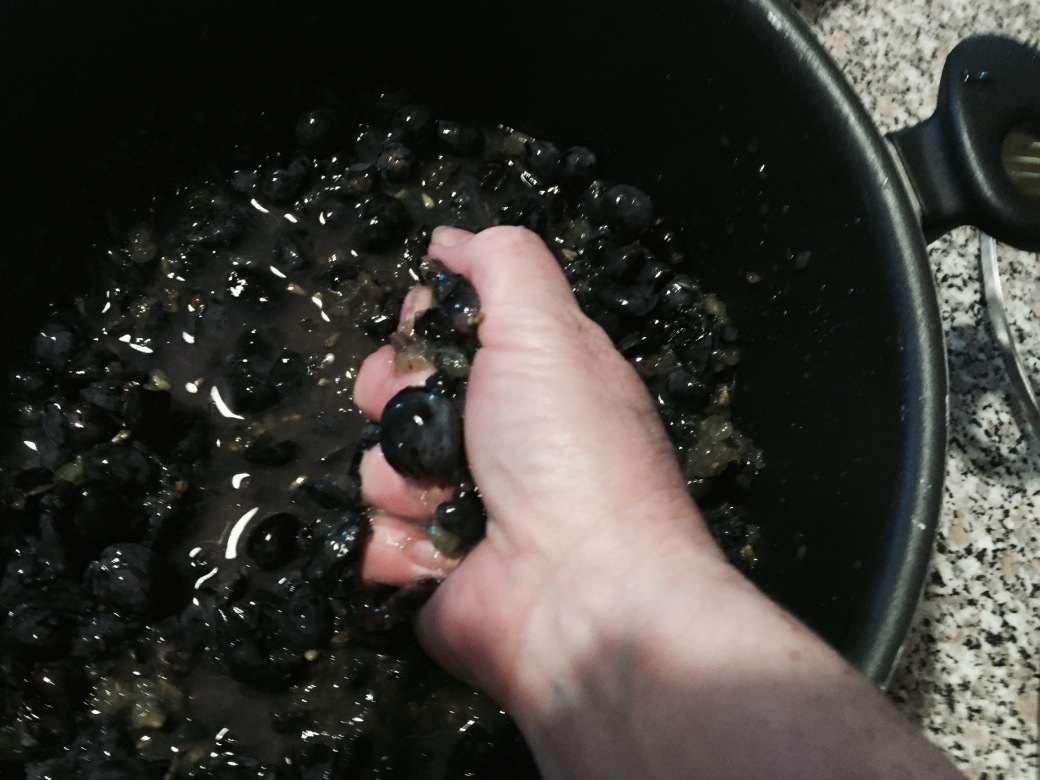 6. DO NOT add anything!  Put the covered pot on the stove over a low flame until it starts to boil.  Then simmer it while you have a glass of wine and gossip with a pal. I of course forgot about it and think it simmered for 15 minutes plus a bit.

7. Take something heavy and squish some more – it is easier to squash hot grapes.  The second time I did this I used a newly purchased potato masher to do the second squash.

9. Line a colander with cheese cloth and set it over a big bowl or pot.  I couldn’t find cheese cloth here and tried a bunch of places.  My ever creative and brilliant cousin Carmella suggested gauze from the pharmacy.  They had sterile gauze and it worked.

10. Pour the batch of grapes in the colander and cover the colander with a towel or something while it drips for a few hours.  No, you must really cover the colander – why?  Flies love piles of icky sweet stuff.  After a few hours – how many?  Well, we went to the piazza for drinks, chatted with friends, had dinner then I remembered the grapes.  Quite a few hours later, I picked up the edges of the gauze and squeezed the rest of the juice out of the cooked grapes.  Yes, I used my hands again to twist the fabric – like wringing out clothes – and squeezed out every drop.

11. Pour the yummy juice in bottles, refrigerate and drink.  We tried it the next morning and couldn’t believe how good it tasted.  Hmmm  Hmmm Good!

4 thoughts on “Home Made Grape Juice – Better Than Welch’s!”