What a magical day I had.  The day really had nothing to do with me but it really felt like I was on a roller coaster of a journey seeing Pontelandolfo for the first time and sensing the connection to my past, present and future.  Only it wasn’t my past.  It was the past of the Domenico Mancini family.  Like many other Mancinis this family can trace it roots to a section of Pontelandolfo called Minicariello.  Whoa – let me start at the very beginning.

Last year I got an e-mail from a woman who had googled Pontelandolfo and hit upon my blog.  After pumping up my chest like the winning rooster of a cock fight – I mean someone actually googled and found my blog you’d be all proud and cheeky too – I responded to Kristen Ross’s request for help.  It seemed like her good family friend, Domenico Mancini, had left Pontelandolfo when he was 18.  When he was a tyke, his dad had died in World War II and the family didn’t know where his body was.  Check out this post to get the back story – http://wp.me/p3rc2m-dw.  Now, many months later the entire Mancini clan was coming to Italy to visit the grave and see where their dad was born.  Their first stop was the Sacrario Militare dei Caduti d’Oltremare (Military Memorial to the Fallen Overseas) near Bari.

Domenico had not been back to Pontelandolfo since he left as a young man – about  64 years ago. Kristen – the point person for organizing the trip  – asked if we could meet when they got to the village.  What a magical meeting and day we had!  After getting the “we’re here” text, Jack and I pulled into the piazza and saw the biggest shiny silver mini-van/mini tour bus I had ever seen here. Pouring out of it was the Famiglia Mancini.  Never having seen these folks before or even really knowing their names I was swept into a stream of “I’m Kristen -Nancy – Domenico- Rich – Marylou – Tony”, hugs and kisses. It was as though they were my family too.  After a few seconds of where should we go and what should we do, it was decided that we visit the Cemetary so that Domenico could look for his family. Everyone – the men in the family are really tall – leaped back into the van. I, being the shortest person in the crew, had to climb, pull and crawl my way in.  The trip to the cemetery couldn’t have been better. 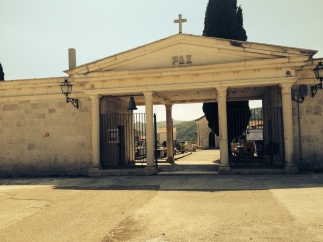 Rito Sala, the caretaker/administrator, warmly greeted the family, pulled out his trusty typed sheets of who was where and led the search.  Unfortunately, Domenico didn’t really remember the dates of when his nonna died etc.  Without the dates it is hard to truly figure out who is who.  Remember,  in this small town hundreds of people have the same last names but are not related.  Domenico had seen my blog about the boxes of bones in the cemetery chapel and wanted to see if his ancestors were there too.  We went on down and he found a number of boxes with names that he remembered.  The caretaker took us to visit the older section of the cemetery walls (see blog http://wp.me/p3rc2m-hI ) to see if Dominico could hone in on relatives.  It was a very emotional exploration.

Dominico really wanted to see if he could find the house that he was born and lived in until he came to America. This section of Pontelandolfo is really off the grid.  I knew of one person who could guide us there – another Mancini!  My incredibly kind and generous cousin-in-law, Mario Mancini, was pressed into service.  With he and Jack in the lead car we wended our way, up, up and up a mountain over the kind of narrow winding roads that worked really well for donkeys.  Soon we made it to Minicariello and started climbing up to medieval ruins looking his his house.

Now he hasn’t been here in a really long time. When he left there weren’t any roads and you really used donkeys to get around.  Now there are roads and some folks from Naples are buying up the ruins and redoing them as weekend houses.  Things look and feel different.  The tenacious Mancini clan would not give up.

One of Domenico’s sons found a group of people sitting outside a restored house.  Tony tricked his dad into meeting them.  Dominico speaks the dialect of Pontelandolfo as though he never left and started sharing his story.  This group showed the family another group of attached abandoned ancient homes.  It was there that the family gazed upon the first home that Dominico ever had.  It was an incredibly emotional moment.

The first time I came to Pontelandolfo in the 1970’s with my Aunt Cat and cousins she had memories of an ugly place full of poverty.  We drove in, stared at the fountain and practically fled.  Dominco related similar feelings to his children.  His memories are of incredible poverty and the feeling that they were lucky to get out.

Through the eyes of the younger Mancinis, the beauty that is the Pontelandolfo was reborn for Dominico.  Everyone was overwhelmed with the incredible mountain vistas, the friendliness of the people and the sense of community that one can feel in the piazza.  During our descent, Mario surprised everyone and pulled his car over.  He made us trek through a short field to see a Roman Fountain – yes ancient Romans actually got their mountain spring water here.  Just another of Pontelandolfo’s fabulous secret spots.

After a beers at Bar Mix Fantasy, I led part of the crew up the hill to the Mother Church.  Luckily, it was open and they could take a quick peek inside at the alter where their dad was baptized and nonna was married.

They invited Jack and I to join them for dinner along with Mario Mancini and Carmella Fusco.  Carmella, Dominico and Mario were real “chiacchierone” laughing and chatting away in the dialect of Dominco’s youth.  The night was filled with sharing stories, trying to figure out if we were all somehow related and feeling – well just like family.

2 thoughts on “Yesterday Was Better Than Christmas Morning!”