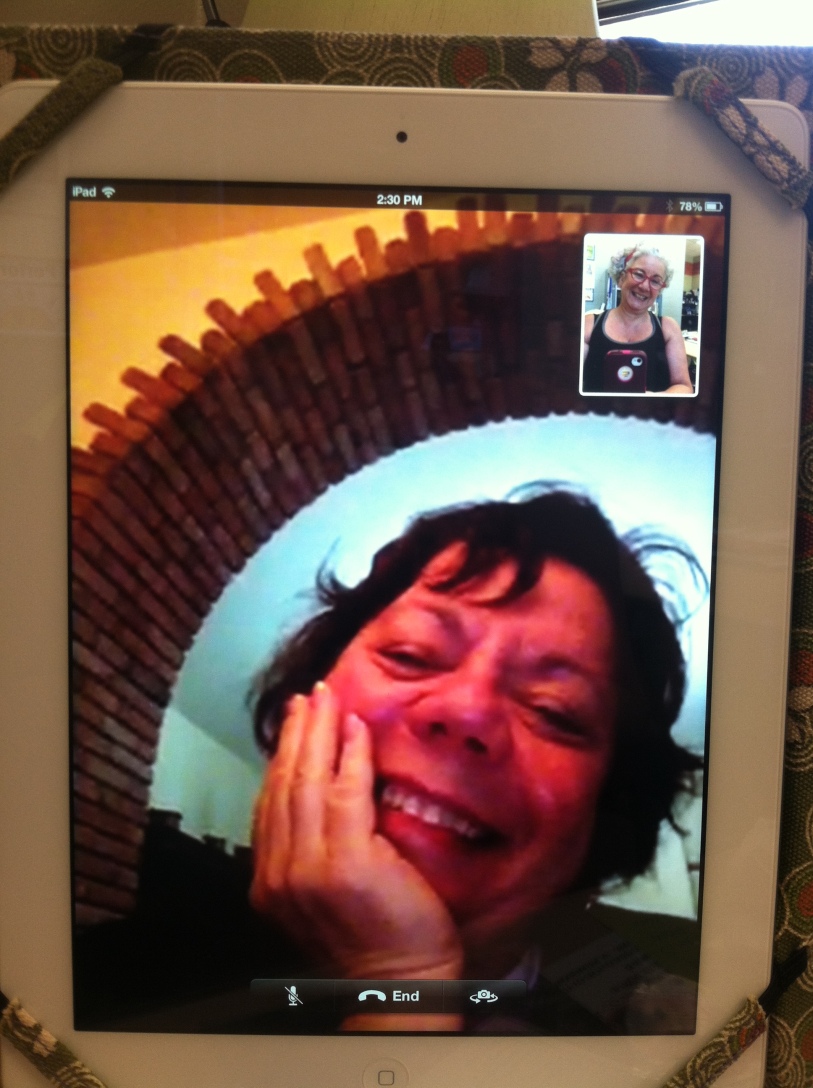 FaceTime at work!  I hate to do a commercial for Apple but I have to tell you, FaceTime is an incredibly easy way to chat with the pals at home.  Sometimes, however, the visual can be a little scary.  I mean you never know in what state of composure you are going to catch someone.  But then, they don’t have to answer the chirp.  My best bud Janet called me via FaceTime and snapped this shot of me on her iPad with her iPhone.  Facetime works really well from iPad to iPad.   What I really like is the ability to switch the camera from a shot of me to a shot of where ever I am.  There is a camera on both the display side and the back.  Or is that the front?  Apple says “FaceTime works right out of the box — no need to set up a special account or screen name. And using it is as easy as it gets. Let’s say you want to start a video call with your mom. Find her entry in your contacts and tap the FaceTime button.”  (http://www.apple.com/ios/facetime/ )  It hasn’t been quite that easy for me.  After you tap the FaceTime button you are asked if you want to use the person’s cell phone number or e-mail address.  I discovered that my friends and I had to use our e-mail addresses not cell phone numbers.  Once we figured that out it was seamless and we use it often.

Skype is another service that I use to chat face to face with friends. You have to know the person’s Skype moniker and that is a pain in the proverbial butt.  I can barely remember my own name and find it tedious to e-mail pals and ask for their Skype addresses.  The Skype visuals seem out of focus or pixel yucky (note the techy jargon).  Microsoft now owns Skype and I wondered if that was why it didn’t work well with my Apple family of products.  The audio, however, is always pretty clear. Occasionally  it is a little behind the video – kind of like bad English dubbing of a foreign film. Or bad Italian dubbing of Law and Order.  I have put a few pennies into the Skype pot to make calls to landline phones and it has never worked for me.  It is pennies to call the USA via Skype and Verizon charges gold bullion for international roaming.  That said, the Skype calls never connected and were dropped.  I have read a number of reviews on line that swear that Skype calls work really, really well.  Well, I really, really haven’t experienced that.

The easiest interface to use is facebook.  All of your two thousand best buds are listed on the right hand side of the screen.  A little green dot means they are allegedly on-line.  The little green dot could also mean the computer is on line the the human is out having cocktails on the patio.  Click on the name of the friend whose green dot beckons you.  A screen pops up so that you can instant message or click on the little camera and a video call begins.  You don’t have to know their phone, number, e-mail address or shoe size.  I have used the facebook video chat a lot.

Facebook is how I connect with my Italian family when I am in the USA.  The video is often rough around the edges – to the point of being ghost like.  The audio quality seems to vary depending on the space the person is in – cavernous echoes have been known to happen.  I didn’t realize until I sat down to write this that Skype and facebook now have some sort of marriage.  The icons appear on both web-sites.

To summarize:  the Apple FaceTime wins but if you want to hear the voices of those you left behind any of these internet methods will work.  Happy calling!  Hey, if you know of any other ways to beat the phone companies and BS for days with pals around the world let us all know!  I’ll be calling you!